Once you take the leap from using fireworks one-at-a-time to creating fireworks shows, you suddenly enter a world of special fuses, clips, firing systems and ignitors. It can be overwhelming! How do you decide the best way to execute your vision for your show and light all of your fireworks at the right time?

At Superior Fireworks, we want to help you envision the high-quality fireworks shows that can be created from our products, and today, we’re exploring ways to fire your show. There are three widely-practiced methods to ignite multiple fireworks at once, each with its own pros and cons. Better understanding each one will help you take your show to the next level.

This is the method that most of us already use to set off fireworks — simple ignition of the fuse by a long lighter or torch. While it is the cheapest and easiest method to setup, there are some things to keep in mind when using this approach with multiple fireworks.

When using this method, you fire your show using multiple people lighting fireworks from different firing positions. You should never attempt to light more than one fuse at a time at the same location. Doing so puts you at risk of one firework going off while you are trying to light another one right next to it.

It can also be a little difficult to coordinate firing the show between shooters when using this method. The darkness, space between firing positions and noise from the fireworks themselves can make communication between you and the other shooters difficult. As a result, the timing of hand-lit shows tends to be a little off from the various firing positions.

With this method, you use various lengths and speeds of fuse to connect multiple fireworks together. Fuse speeds range from very slow safety fuse which burns about 25 seconds per foot to very fast fuse that can burn as quickly as ¼ of a second per foot! Once you figure out how much time is needed between fireworks, you can cut the fuse to the proper length and connect it all together using tape and/or plastic zip ties. 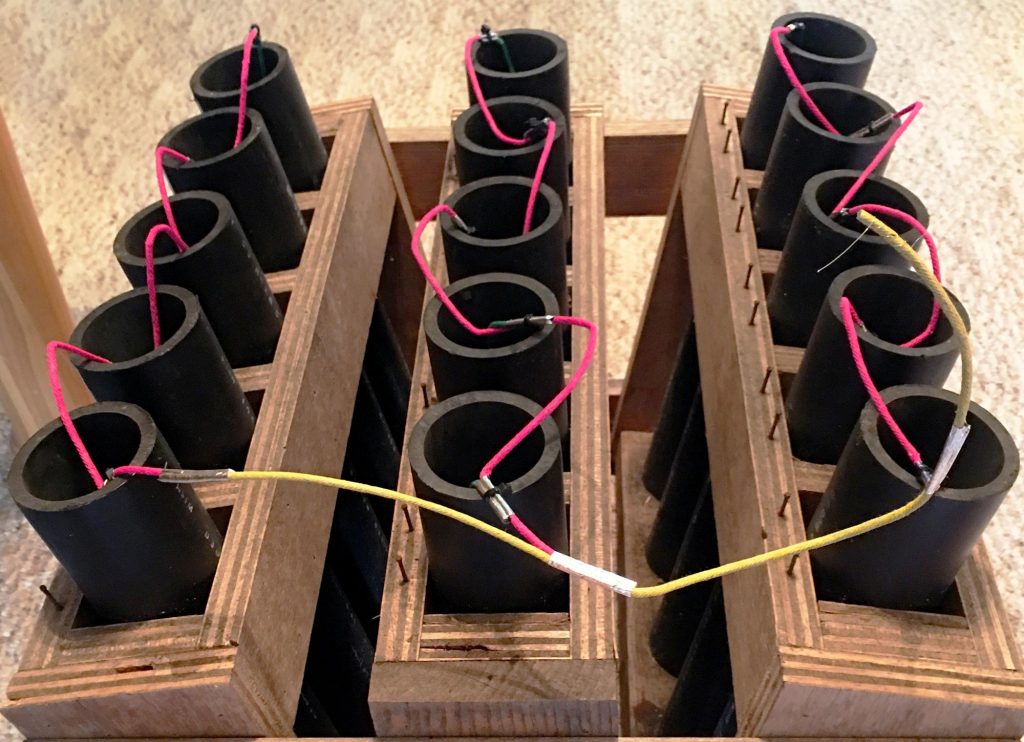 The appeal of this method is that you can setup the show in advance, light a single fuse and then stand back and watch as the interconnected fuses light firework after firework in an almost automated fashion. On the surface, chain fusing seems like the ideal method. It eliminates the expense of electrical firing systems (discussed below) and the difficulty of coordinating multiple shooters with the hand-lighting method.

However, it does have a serious safety drawback. Once the main fuse is lit, it is difficult–if not impossible–to stop. Should something go wrong, there is no fast and safe way to stop the show. Should a firework misfire or tip over, there could be a domino effect of problem after problem. For this reason, chain fusing is not allowed on professional shows and we discourage our customers from using this method.

Our customer Phillip and his friends put together an awesome July 4th show this year that relied a lot on both chain fusing and hand lighting, but they mitigated some of the safety concerns by only fusing together small groups of fireworks at a time. They also used multiple firing stations spread very far apart, and kept everything a safe distance from their audience.

This is the method used by professional fireworks shows and the only method we recommend for more elaborate shows. Electrical firing systems allow you to keep a safe distance between you and the fireworks and most systems allow the show to be paused or stopped should an emergency arise.

These systems use electrical current to heat up either a highly-resistive wire or an electric match (e-match) which in turn ignites the firework fuse. Only licensed professionals can purchase and use e-matches, so be sure to purchase a system that can use consumer-friendly ignitors such as Talons or Neoniters. There is also a newer ignitor produced by MJG Technologies called the MJG Firewire Initiator that is like an e-match but is not regulated by the ATF and can be used by consumers.

The costs for these systems have dramatically decreased in recent years, making it more feasible for individuals to invest in the technology. Even so, electrical firing systems are still expensive compared to the other common ignition methods. It also takes more thought and time to properly setup an electrically-fired show. After all, you don’t want to cut corners and have a San Diego incident:

When used correctly, though, the added show control and safety when using electrical firing systems is worth every minute and penny spent. This is the method our team uses when setting up product demos for our own staff.

Our customer Cel used this method on his show this past July 4th and actually recorded the fireworks on the ground so you can see each one lighting and launching as he cues them remotely.

Of course, the point of all this is to watch it happening in the sky!

We have covered the basics of each firing method here, but there is a wealth of detailed information online and we highly recommend that you research carefully before deciding which method to use for your shows. Remember, safety first!

We also recommend reading our post about Tips for Making Your Own Fireworks Show as you start planning your next show. In that article, we explain the fundamental concepts of good fireworks show design including timing, duration, pace and even finale considerations.

Next Up: Creating a New Year’s Midnight Salute

We have designed the perfect fireworks show to celebrate the new year that we’re calling “New Year’s Midnight Salute,” and we’re sharing all the details so you can create it yourself! Subscribe to our posts and follow up on Facebook so you don’t miss it.